It’s incredible the lengths some people will go to in order to raise money and help an important charity effort.

Take Wiltonians Jeff Snyder and Dave Pennino, for example. They’re not above a little self-deprecating embarrassment if it means raising money for a cause they hold close to the heart. The two men are so committed to raising money to fight childhood cancer, they’ll be donning lemon costumes during the month of September, and will periodically appear out and about in Wilton with a special challenge to town residents. 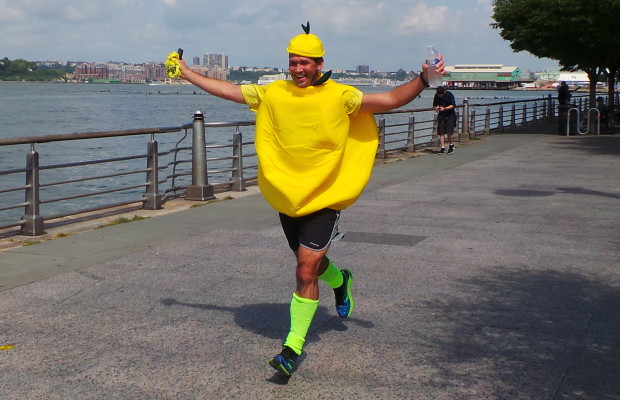 The idea behind the “1 million mile” mark is straightforward: every day, parents of children battling cancer travel thousands of miles for treatments. During September, which is Childhood Cancer Awareness Month, Alex’s Lemonade Stand Foundation goes a million miles to raise awareness and fund­raise for cures. Alex’s Million Mile is a nationwide initiative, encouraging people to go the distance – running, walking or biking – and collectively run, walk or ride one million miles, to fundraise in support of finding a cure for childhood cancer.

During this month, Warriors for the Cure team members run, walk and bike, logging miles as part of a nationwide effort to collectively run 1 million miles total. The team has been the Top National Fundraiser for Alex’s Million Mile the past two years, and Snyder and Pennino are determined to maintain their title of Top National Fundraiser for the third consecutive year.

So how do the lemon costumes fit in? To raise awareness, the two men have come up with a new way to rack up miles and attract donations: they will be completing some of their daily runs this month sporting a lemon costume, starting this weekend. Anyone who spots the running lemon is encouraged to snap a selfie with them and upload it to social media using the hashtag #LemonSuitSelfie. For every photo shared, the founders will donate $10 to the Warriors For A Cure team, benefitting Alex’s Lemonade Stand Foundation.

The photo, above, is of Snyder running through New York City during last year’s Alex’s Million Mile kick-off event. Alex’s Lemonade Stand Foundation (ALSF) was inspired by the front yard lemonade stand of cancer patient Alexandra “Alex” Scott (1996-2004). In 2000, 4-year-old Alex announced that she wanted to hold a lemonade stand to raise money to help find a cure for all children with cancer. Since Alex held that first stand, the Foundation bearing her name has evolved into a national fundraising movement, complete with thousands of supporters across the country carrying on her legacy of hope.

To learn more about Warriors for a Cure and the Million Mile Run/Walk/Ride, or to donate and support the team, visit their team fundraising page.