Why IHOP’s Change to IHOb is Both Brilliant and Tragic

On June 4th, IHOP tweeted out to the world that the restaurant’s name would be changing to IHOb, with an announcement of what the ‘B’ represented to come on June 11th.

Well, June 11th has come and gone, and we now know that the ‘B’ stands for burgers. Since then, this marketing stunt from one of America’s most well-known restaurant chains has been widely derided by critics. What will burgers do to fix the floundering business?

Though reactions on social media have portrayed the temporary change as ill-conceived, this write-up from Adweek shares a different perspective: maybe pancakes were part of the problem. Through social listening, IHOP determined that the average consumer’s interest in pancakes has declined about 20% since 2010. Meanwhile, consumer conversations about burgers have doubled in the last five years, making for a seemingly perfect item to rebuild the menu around.

Yet, despite the data in IHOb’s favor, I’ve got a few lingering questions about the effectiveness of this change – as temporary as it may be. 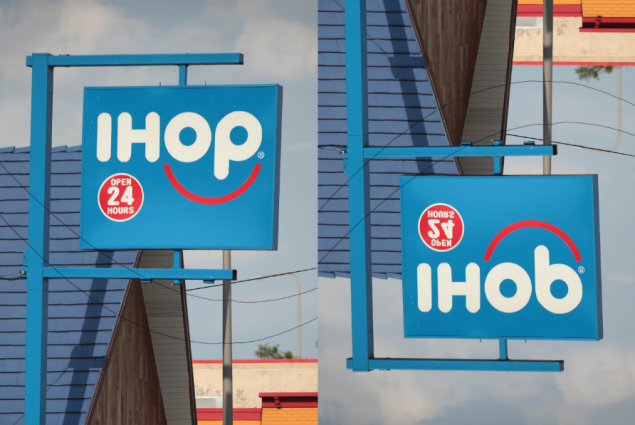 Why Not ‘B’ for Breakfast?

Count me among those who agree with shifting the focus from pancakes. On an annual basis, countless Americans remove gluten from their diets. As recently as 2017, that number was at 3.1 million, with 72% of those being by choice rather than via a Celiac’s disease diagnosis. Further still, no nutrient is more vilified by the American public than sugar. According to the International Food Information Council, 77% of Americans are trying to limit or avoid sugars, while 33% think it is the nutrient most likely to cause weight gain – outpacing both carbohydrates (25%) and fats (16%).

So, yes, pancakes were a problem.

Still, opportunity abounds in the breakfast space. Aside from the obvious – breakfast, too, begins with a ‘B’ – it is also the only meal that continues to grow in volume in the restaurant industry. Thirty-one percent of consumers view breakfast as more of a destination than they did in 2015, marking a significant change in sentiment. Rather than seeking out carb-loaded pancakes, consumers have turned to protein-rich breakfasts. And, rather than eating breakfast solely in the morning, breakfast is seen by 30% of consumers as an all-day option.

Wouldn’t it have made sense to restructure breakfast options than do a total about-face?

Will Focusing on Burgers Work?

It’s true – burgers are having their moment right now. Whether it’s a higher-end restaurant, casual local spot, or fast food, everyone has their own take on the American classic.

Burgers are trendy, but the competition is fierce. Premium burger chains like Shake Shack, Whataburger, and In-N-Out have proliferated across the country, while established fast food purveyors like McDonald’s, Burger King, and Wendy’s continue to operate within sustainable business models. Why would consumers go out of their way to IHOb for a burger when they can get one of equal or better quality – in less time – elsewhere?

In the end, IHOb hasn’t even addressed its biggest problem: younger consumers have eschewed old-school, casual dining restaurants on the whole. Instead, fast-casual restaurants are thriving with snackable foods and on-the-go options that accommodate the fast pace of their consumers’ daily lives.

As a PR stunt, IHOb hit the jackpot. From this vantage point, though, it doesn’t appear that tangible business results will follow suit – burgers or not.