How Consumers are Gearing Up for Father’s Day 2019

With Father’s Day around the corner, consumers across the country are doing their last-minute shopping for the dads, grandfathers, husbands, and sons in their lives. This year, U.S. spending on the holiday is projected to reach an all-time high total of $16 billion, which represents a 4.6% increase from last year’s $15.3 billion and a 70% increase from just a decade ago.

Here, we take a look at projections for Father’s Day 2019 in order to understand the who, what, and where of consumer spending on the holiday.

The average person is expected to spend $138.97 on Father’s Day this year, up from last year’s $132.82 and $91 from a decade ago. Which consumers will be spending the most? The highest overall spenders come from the 35-44 age group, with an average expenditure of nearly $200. When it comes to spending by gender, men will outspend their female counterparts, with the former projected at $160.74 per person and the latter at $118.29.

What Will They Buy?

As a classic complement to most Father’s Day gifts, greeting cards lead the way in terms of the most popular purchases. What types of gifts will come along with the cards? 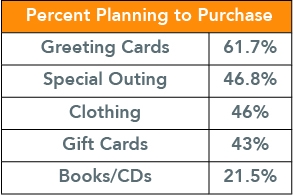 As you can see, special outings are projected as the most common gift, followed by classics such as clothing and gift cards. The popularity of special outings, in particular, speaks to consumers’ increased interest in experiences over possessions.

Now that we’ve taken a look at the most popular presents, let’s take a look at which ones project to be the most profitable. 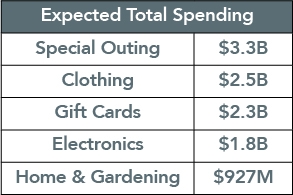 Despite being the seventh and tenth most popular gifts among consumers, electronics and home improvement/garden supplies show up in the top five in total expenditures, likely due to a high average cost per transaction. For brands in both of these categories, a well-placed experiential marketing campaign ahead of the holiday can boost awareness among Father’s Day shoppers and, consequently, increase sales.

Where Will They Buy?

In what’s likely a surprise to some, department stores remain in the top spot for Father’s Day shopping, with 39% of consumers reporting they’ll purchase there. However, that isn’t likely to last for much longer, as online shopping sits close behind at 34%. With nearly 60% of smartphone and tablet users saying they’ll consult their devices to aid in Father’s Day decisions, it’s only a matter of time before online takes the top spot. At 24% and 23%, respectively, discount and specialty stores round out the most popular shopping destinations for the upcoming holiday.

Is your brand looking to get a leg up on the competition for Father’s Day and future holidays? Contact us today to learn how our suite of experiential-led services can help you build awareness for your brand and earn lifelong loyalists.