Blog / Beverage / Looking Back on the Summer of (Hard) Seltzer

Looking Back on the Summer of (Hard) Seltzer

According to analysis from UBS, the hard seltzer category is currently a $550 million business, and it could be worth up to $2.5 billion by 2021. Likewise, Nielsen tells us that the category has grown 200% over the past year, with 164.3% of that coming from the month of July alone. Added together, these numbers seem to confirm what we’ve already seen with our eyes this summer: hard seltzer is here to stay.

But what is it that makes seltzer so popular amongst consumers, and why is it poised to remain a mainstay on shelves in years going forward? Here, we’ll take a look at the history of the beverage, the reasons for its widespread appeal, and expectations going forward.

Where did this come from?

While it may seem that the hard seltzer trend came out of nowhere, the origin of the category really began with Zima in the early 1990s. Though sales numbers were considered strong, Zima was met with a fair degree of ridicule in its time, ultimately diminishing the product’s staying power.

The second coming of hard seltzers, which came in 2013 when SpikedSeltzer arose, owes a degree of credit to regular, non-alcoholic, flavored seltzers. A favorite in offices across America, seltzers saw their sales grow 42% over the five-year period ending in 2017 as consumers began to give up soda due to sugar and calorie concerns.

As previously mentioned, these wellness concerns have become even more pervasive today, setting up hard seltzer as the perfect option for those looking to make a healthier choice while still enjoying an alcoholic beverage. Today, offerings ranging from Diageo’s Smirnoff Spiked Sparkling Seltzer to White Claw and Truly have capitalized on the increased consumer demand. 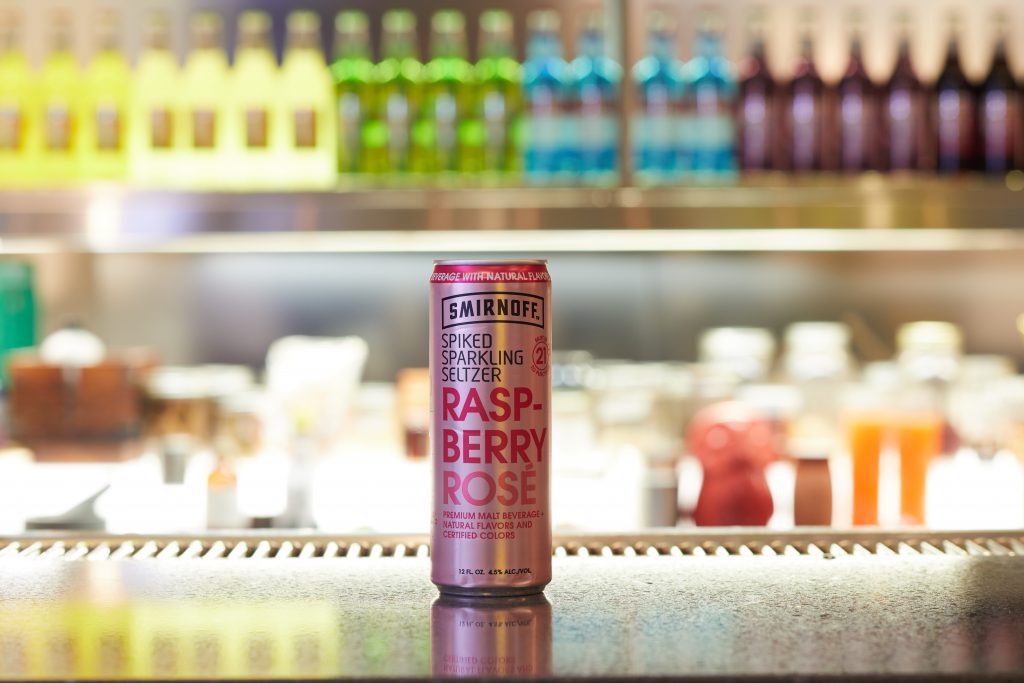 Why the wide appeal?

The wellness movement has played a significant role in the growth of hard seltzers, but it’s not just about the calories and sugar. Consumers have begun to seek out no- and low-alcohol beverages, making hard seltzers ranging from 4-6% ABV an appealing option compared to most other drinks on the market. Oh, and they’re gluten-free, too.

Availability is another contributing factor to the popularity of hard seltzers. These ready-to-drink (RTD) cans are convenient, portable, and widely available. While most are purchased in the off-premise, even some on-premise establishments have gotten in on the fun. Recently, the Dream Hotel in NYC began serving Smirnoff Spiked Sparkling Seltzer’s Raspberry Rosé as an on-tap offering. Hard seltzers are also relatively inexpensive. Despite the modest pricing, they maintain an aspirational quality due to consumption occasions; younger consumers, in particular, tend to enjoy these beverages while out and about doing summer activities with friends.

Finally, unlike for Zima, hard seltzers are perceived as gender neutral by many of today’s consumers. Whereas men were hesitant to proudly enjoy a Zima, they’re far less concerned about drinking the numerous offerings on the market in 2019. This speaks to a staying power that was not there for first-generation hard seltzers.

Coupling the UBS category projections with this historical context gives us a lot of confidence about the staying power of hard seltzers. Skeptics, though, will point to their seasonality as one of the foremost concerns; in 2018, 47.2% of sales happened between Memorial Day and Labor Day.

Additionally, we can expect adjacent categories to pop up and attempt to steal market share. Canned sparkling wines represent an anticipated challenger, and other trendy beverages, such as kombucha and green tea, will likely be used as bases for RTD alcoholic offerings oriented towards consumers seeking natural, organic messaging. Still, though, the truth is that hard seltzers are well-positioned to maintain growth and relevance due to consumers’ continued focus on holistic wellness and the category’s affordable, yet aspirational nature.

Contact us today to learn how our suite of experiential-led services can help you reach today’s wellness-minded consumers and earn lifelong loyalists.

Sources: Markets Insider Hard Seltzer Sales are Booming in the US – and UBS Says These 5 Beer Companies are Best Positioned to Profit from the Trend, Vox Hard Seltzer is Here to Stay, SevenFifty Daily What’s Fueling the Rapid Growth of Hard Seltzer?